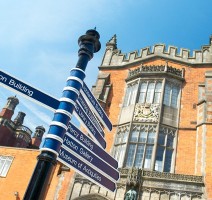 Newcastle is placed in the global top 150 universities in both the Times Higher Education (THE) and QS rankings published in 2011. The THE ranked Newcastle 146th overall, and 56th equal in Europe. The QS table placed Newcastle 127th, a rise of 13 places on the previous year.

The Sunday Times league table of UK Universities places Newcastle in 12th place (out of 121) in the UK.

Amongst all British Universities in 2011, Newcastle University is ranked:

Newcastle University’s legacy of achievement has done much to cement its place among the UK’s top universities, but it is a reputation for high-quality teaching, cutting-edge research and first-class facilities that makes it such a popular choice with both students and employers.

For more details about Foundation Year structure, intake dates, fees, accommodation and INTO Newcastle University (for Newcastle University), please contact us. Free hardcopy prospectus is avaible, too. If you are in Singapore, you can obtain a copy at JACK StudyAbroad office.